Demand has been rising over the last 5 years for a personalized computer you can integrate into your home to help you with chores, queries and even conversation. Hollywood has always promoted the idea; ‘Her’, ‘Ex Machina’ and ‘2001: Space Odyssey’ all highlight the benefits of having the perfectly intelligent robot to guide humans through their lives. Due to the prominence in popular culture and the technology becoming rapidly more accessible, a race is on to become the market leader for digital assistants.

The act of having a conversation with the integrated software has been described as uncomfortable in a number of customer surveys. Talking to a device in the comfort of one’s own home seems to be a much more natural act for people and Amazon have been the first to reap the rewards from this. The thousands of skills the Amazon Echo is capable of include creating a grocery list, listening to music, ordering a pizza and even turning your house lights on and off. Simply saying “Alexa” from an impressive distance will activate the system and the ease in which you can interact with the soothing female voice is remarkable. The popularity for this product has soared, with The Business Insider claiming that there are 35.6 million users of voice enabled speakers in the US in 2017. Amazon’s Echo claims 70.6% of that.

Amazon and Google are two of the most competitive forces in the technology industry. Because Google has always played in the advertising revenue space and Amazon in online retail, this meant that their products were never directly matched up against each other, until recently. Google has responded to Amazon’s capture of the digital assistant market by introducing the ‘Google Home’ device. The Home has similar features to the Echo but according to CNET, it outsmarts Alexa with its conversational intelligence by storing a question one just asked which allows it to understand the subject of the follow up question. Google has created a product to compete with the Echo. However, it simply can’t match the 15,000 skills that the Echo possesses as well as the first mover advantage and these seem to be the reasons for Amazon dominating.

Emergence of the ‘Flash Briefing’


Due to its cloud-based technology and conversational tone, a feature many are using voice assisted devices for is the news reading. The ability to wake up in the morning and simply ask the machine “what’s the news?” has captivated users. Business Insider reports that 66% of Amazon’s Virtual Assistant users have taken advantage of the Flash Briefing feature. While skipping the steps of opening your phone, finding the app or folding open a newspaper, Alexa also reads you the news in a calm and logical way. These pre-recorded stories update you from a range of outlets such as BBC News, Accu Weather and NPR. 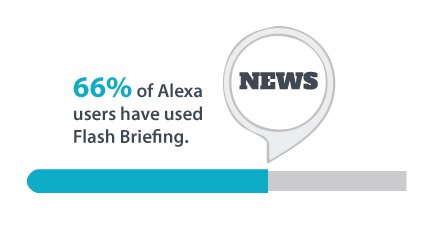 A reason that the Echo and Google Home are differentiating away from radio stations or podcasts is due to their ability to pause and simply ask a question about the story or anything in general. For example, a story states that the President of Malta has been elected. You can interrupt the devices when the story is being told and ask “What is the population of Malta?” or “How many votes did they win by?” This unique way of hearing the news could impact the journalism industry greatly. The conversational way of interacting with the media is very hard to compete with for newspapers and radio stations because none of them have the technology or resources to create their own back-and-forth relationship with listeners. One could argue that this isn’t much of an upgrade from simply typing in questions to Google search while listening to the news but the convenience factor has been driving sales in the tech industry for years.

Experts are predicting that this isn’t a temporary trend either. RBC’s Capital markets are claiming that by 2020, Amazon and Google will collect $10 billion in revenue from Voice Assisted devices, which means Amazon alone would have 500 million active customers globally. The investment bank described the technology as a “material opportunity with the possibility to be a mega-hit”. Due to Amazon rising as a main source for people to online shop, their possibilities to advertise the devices on their website are endless. Advertising and promotion is another area that they have a significant advantage over the newspapers and radio stations. 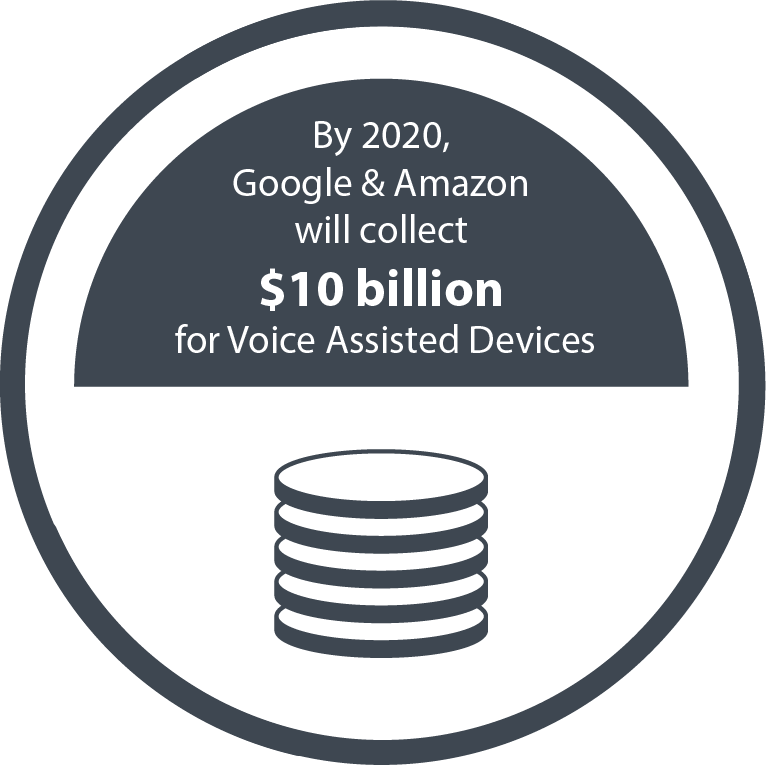 The new version of the Amazon Echo includes a 7-inch touch screen which gives users the opportunity to view displays of the weather, read recipes, and watch videos. The Flash Briefing of the morning news now includes short video opportunities. News networks and magazines were quick to adapt to this advancement and have started creating daily video recaps so they can be featured on the Echo Show. CNBC, CNN, and People magazine have all launched flash briefings featuring their main news anchors in an attempt to become a reputable name on this increasingly popular feature. This could prove to be a trend that may now emerge in journalism; news providers adjusting their content and means of communication to accommodate to Amazon and Google’s technologies.


Artificial intelligence may not only be revolutionizing how the news is read, it could be changing how stories are written too. Google’s Digital News Initiative, which was a partnership set up to promote innovation through technology in the news industry, handed out its first grants in July 2017. One of the largest was for the Press Association to run a service with computers writing localized news stories. According to The Guardian, humans create story templates for a range of topics, then Natural Language Software (the same software used in Siri and Alexa) will create multiple versions of the story to increase content distribution. PA will use Radar- Reporters and Data and Robots- to boost distribution up to thousands of stories a month. Radar will also auto-generate graphics, videos and pictures for the stories. This is a huge statement from Google showing how they are very serious about impacting the journalism industry through funding Artificial Intelligence Systems. The PA’s Editor-in-Chief, Peter Clifton claims that “Skilled human journalists will still be vital in the process, but Radar allows us to harness artificial intelligence to scale up the volume of local stories.” These bots are not yet capable of completely replacing human labor in the newsroom but surely this will make certain positions expendable. There is no sign of AI technology slowing down its capabilities and if it is going to affect journalism, newspapers must use it to find ways to differentiate away from competition such as the Echo and Google Home. 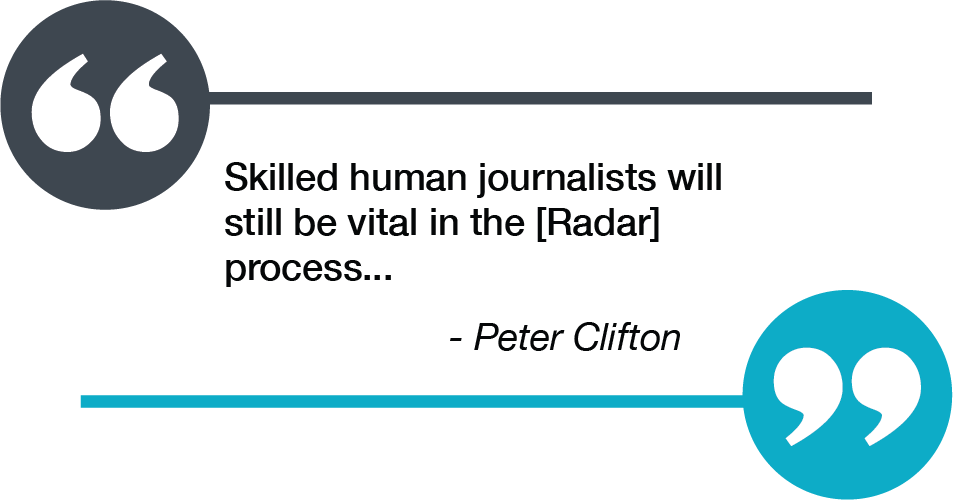 The age of AI is one that will catch a number of industries by surprise in the coming years but journalism is already showing signs that reform will be forced upon it. More and more consumers are introducing AI into their lives based on convenience, the unique features and the interactive approach these technologies possess. Due to dwindling attention spans and limited time for individuals during the day, news has become a rapid fire service where the majority of people demand the key details presented in an easy manner. Alexa, Google Assistant and other Natural Language Software are providing for these demands with a personalized tone. Journalism will be faced with the decision to fight against AI or to incorporate it and welcome it into their processes. The power of Google and Amazon in today’s markets show that the decision might already be being made for them.

AdPerfect Adds The Seattle Times to Its Growing Customer List

How fake news is creating profits

The Power of Social Media