The Evolution of Classifieds

If you wanted to buy a second hand car 25 years ago, the most common and efficient way to do that would be by collecting the local paper from the doorstep, sitting on the couch and browsing the classified’s section until a particular Ford Mustang caught your eye. The process would then involve calling a phone number or visiting a house address to go purchase the car. Buying from print classifieds was always a slow and tedious transaction and it was just a matter of time before someone would reinvent the market. In 1995, Ebay and Craigslist created innovative products that would change the internet forever- online classifieds.


Craig Newmark founded Craigslist with no ambition to grow it into a vastly successful business, he simply wanted a way to organize San Francisco’s hectic arts and technology scene. However, due to its simplistic and non-commercial approach to private buying and selling, the website attracted 1 million site visits a month by 1997. The website has maintained the right for regular users to post their items for free but as the company continued to expand, fees were introduced to cover the costs of a business license. These include a $25 fee for every job posting in a major US city ($75 for the San Francisco area) and $10 for every New York apartment posting. The company’s revenues ballooned because of this and it was estimated that in the early 2000’s, Craigslist was making $40,000 a day from the San Francisco area alone. The founder, Newmark, insisted that the website would not include banner ads and Google pop-ups to keep the customer experience in tact. Craigslist receives over 50 billion monthly page views and is one of the most popular websites online, spanning across 70 countries using over 700 local sites.

Craigslist was created with the basic buy and sell concept; users pay the price that is listed. In September 1995, Pierre Omidyar decided to create an auction approach to online Classifieds. While coding on his personal computer, Omidyar invented “AuctionWeb” (now known as Ebay) and the first auction was for his broken laser pointer. After clearly explaining it didn’t work, he listed it for $1 and bids rose until someone bought the faulty item for $14. Users fell in love with the idea of bargain hunting and selling their unwanted items for more than expected. Similar to Craigslist with its user friendly platform and minimal ads, Ebay expanded rapidly and by June 1996, $7.2 million worth of goods had been sold through the website. Ebay was put on the stock exchange in 1998 and was expected to trade around $20 per share based on the IPO, but surprisingly started trading at $53.50 per share on the first day. After a number of acquisitions that included Paypal, StubHub and GumTree, Ebay has become the commerce leader in classifieds with the company producing revenues of over $8.9 billion last year. Ebay also created ‘kjiji.com’ as a classifieds site with marketplace-style postings in order to directly compete with Craigslist. 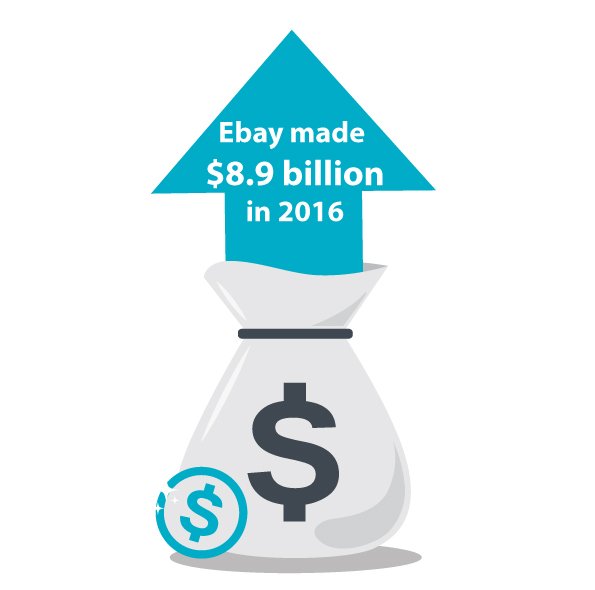 
Before 1995, classifieds were the main money-maker for newspapers; they would make up 40% of their revenue and drive their readership. People would call into customer service and pay $15 to $100 to place ads, and thousands of people would do this every day. When these new websites were created, newspapers were surely expecting to take a hit of some sort, but no one could predict how damaging Craigslist, Ebay and other classifieds websites could be to their success. The Management Science Journal predicted that from 2000 to 2007, Craigslist alone cost US newspapers $5 billion in revenue and shrank their classified ad rates by 20.7%. Although these statistics sound damaging, another perspective would be that Craigslist has saved the American public billions of dollars over the years. Newspapers were widely criticized in the 80’s and 90’s for poor customer service and raising the price of classifieds unnecessarily. In 1981, a line of classifieds in The Washington Post was $2.85, by 1984 they had upped the price to $3.65 and by 1996 a line was $7.93. This wasn’t adjusting for inflation; newspapers were operating at a 30% margin and had so much money they could buy out other newspapers and invest in TV stations. 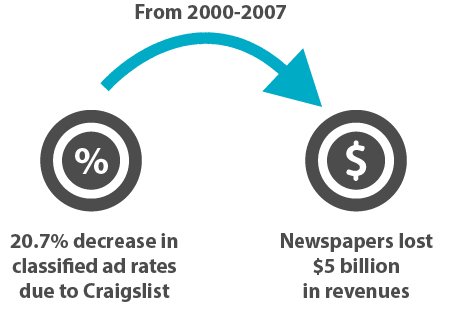 The emergence of the digital age punished newspapers for a dated business model and has forced them to adjust their strategy. However, newspaper classifieds are not dead because it is hard to compete with the security and trustworthiness of having a 3rd party look over private transactions. Fraudulent postings were rare through newspapers but due to the anonymous and fast paced process of Craigslist and Ebay, this is now a serious issue. The attraction of using these platforms is because of the vast selection of items and finding interest for them within minutes. Although screening is set up for Craigslist and Ebay, it is very hard to catch scams when users can post instantaneously. Most papers have turned to a similar free self-serve model for classifieds but they have staff on hand to approve postings and systems can flag unwanted content. This is a major advantage newspapers can now offer over their competition; they have a legitimacy and security in their classifieds. Robert Seamans, a business professor at New York University and co-author of the Management Science Journal study, explained that “we don’t believe newspapers are dying or that Craigslist is leading to the death of newspapers. Newspapers are changing their business models.”


One aspect of private online buying that creates insecurity for most people is anonymity. The major platforms require none or very minimal information about the individual that is selling- usually just an email address is accepted. In October 2016, Facebook added its ‘Marketplace’ feature to the app and website. This is a very mobile-friendly classifieds feature that allows users to buy and sell by linking their Facebook profile to every posting. The primary way to communicate about the post is through Facebook Messenger, which is already an extremely popular app. The new feature has been a growing success, with many attributing this to the personalized ‘social selling’ approach to classifieds. People feel much more at ease when they can message a real person, with a profile picture and an address. After the first year, Facebook tested its feature with smaller retail items, but as of November 2017 the app now allows apartment rentals and car ads to be posted. Emarketer claims that by 2021, smartphone retail sales will make up 80.5% of all retail e-commerce. Due to Facebook’s unrestricted reach across the globe and its influence in so many people’s lives, this could be the most disruptful move the classifieds sector has seen since 1995.

Classifieds will continue to be a high-growth market across the world as more people become comfortable with technology and the availability of goods expands. New entrants have always made an impact by creating a rapid-fire, mass posting platform. As the issue of scams developed, users will deviate away from this in search of a platform that resembles a person-to-person deal more closely. If newspapers can create a process that replicates Facebook’s ‘social-selling’ by linking posts to an instant messaging service and involving personalized profiles for sellers, then they will have a good chance of staying afloat in the ever-changing environment that is classifieds.