How Fake News is Creating Profits

During the Presidential Election of 2016, the term ‘Fake News’ emerged as one of the biggest threats to modern journalism to date. Donald Trump brought the issue into the public eye during his campaign by attaching the label to both CNN and The New York Times after allegations of coordinating with Russia during the election. One would think that after the President of the United States denounces an institution for unverified reporting, its readership would plummet and revenues would follow suit. This wasn’t the case for several reasons, and the result of the Fake News controversy has caused a number of newspapers to rise up and bolster their profits.

Many have said that Donald Trump is guilty of describing anything that challenges him as Fake News, most notably because the Russian claims are an ongoing FBI investigation and worthy of inclusion in a national newspaper. However, during the campaign a wave of non-legitimate, unverified articles poured into social media, mainly through Facebook and gained a vast amount of attention and readers. According to the Pew Research Center, 44% of Americans get their news from Facebook, which is a huge number considering how Facebook has minimal regulation on what can be posted as ‘news’. 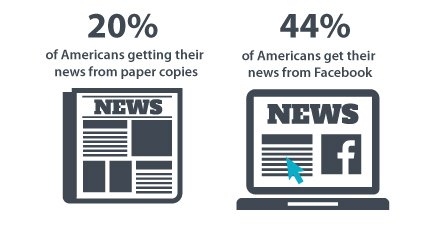 Articles about the Pope endorsing Trump, Ireland accepting Trump refugees and Hillary Clinton arming ISIS, all received over 700,000 engagements at crucial times during campaigning. These headlines are all entirely false, but the ease in which individuals can build a website portraying a broadcasting group, create a headline full of flaws, then manipulate Facebook’s algorithm is shocking. The consequences are these stories featuring on the ‘Trending’ section of millions of feeds.

Due to the availability of so many free online sources for news, a critical issue newspapers have been dealing with for over 10 years, has been their profitability. With only 20% of Americans getting their news from paper copies, digital news has been the dominant force that has been deteriorating newspapers profits at a rapid rate. The solution many companies turned to was to maximize advertising revenues by shifting into the digital advertising space.

According to the Interactive Advertising Bureau, digital ad revenue grew to $72.5 billion in 2016, which is up 22% from the year before. Unfortunately for the newspaper industry, Google and Facebook are absolutely dominating, taking 71% of the market and 99% of the yearly growth. Google’s AdWords and Facebook’s targeted advertising has created an unstoppable duopoly that rakes in over $15 billion between them per quarter. 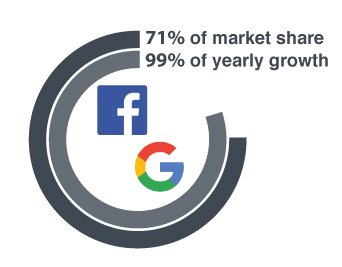 
As a result of Facebook and Google controlling the online scene and limited restrictions being put on what can be posted on these platforms; newspapers are claiming that fair competition is not being promoted for news providers. On July 10th 2017, this caused News Media Alliance to seek an antitrust exemption from Congress in order to negotiate collectively to share revenue and data more fairly. The Washington Post, The New York Times and The Wall Street Journal are all among those banding together to join the appeal so that quality journalism can gain back market share. This is a huge step for the industry, as most of the participants in the appeal are fierce competitors and this proves how tackling the surge of Fake News and regaining a name for newspapers is of utmost priority. 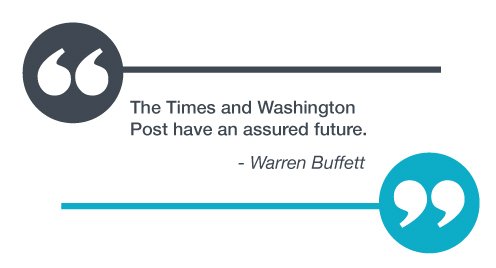 More and more people are becoming wise to false journalism and are calling out for facts and reference-based reporting. Trump has consistently berated The New York Times for not being a reliable source, but in response the newspaper gained 308,000 new digital subscribers and its share price rose by 11% after the election. Now, subscription revenue accounts for 63% of The Times’ revenue share, and advertising only 33%. A trust and security is being instilled in paid journalism that will maintain the future of newspapers. The revenue models should be based around customers paying for their services, as opposed to advertisers. Warren Buffett predicts that The Times and The Washington Post are bound to survive because “they have developed an online presence that people will pay for.” – Warren Buffett 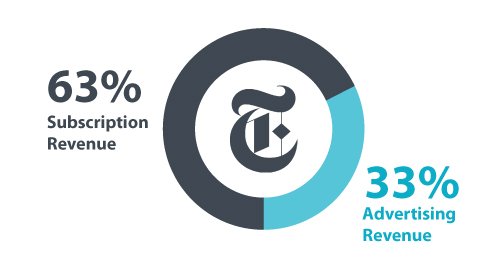 After a frenzy of untruths, that recent studies have shown affected the result of a presidential election, a substantial amount of Americans are looking for an outlet they can depend upon to keep them updated on the world’s events. Creating a relationship with readers and finding new ways to provide valuable information must be the strategy for building profits.

How the strategy unfolded


Newspapers have been experimenting with paywalls and micropayments to regulate how many times users can view articles for free. This has been accompanied with varied success and presents the question of whether they should be promoting a full subscription model or a pay-per-read situation. The Economist, the British business tabloid, reported a


$60 million profit in 2016 due to its push for premium digital subscriptions. Chris Stibbs stated that “discounted copies have been largely eliminated and are being replaced by paid subscriptions. As a result, our circulation profits grew 31% year on year to record levels.” The Economist offers expert advice and analysis on business stories and has built a well-renowned name for itself in Europe. 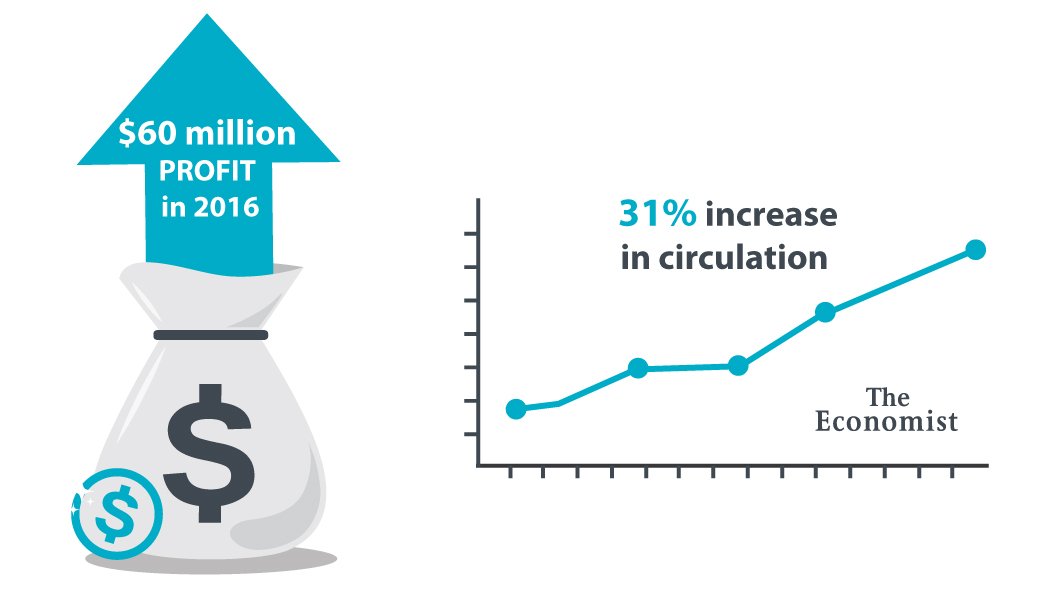 The Winnipeg Free Press was the first in Canada to shift to the pay-per-read model and after a year of implementation, 35,000 paid digital readers signed up after 2016. To view an article, a 27 cent fee is attached or a $16.99 monthly fee for unlimited access. This newspaper, reporting in the 7th biggest city in Canada, shows how much success can be seen from papers with a fraction of the population of New York.

Local community papers have the capability to achieve successes that the large national papers have seen by creating niches and a local reader base as well. Because there are less outlets for small communities to receive updates about their city or town, many find a certain attachment in their community paper as opposed to a national one. A study done by Morning Consult/Politico conducted for the News Media Alliance revealed that 41% of registered American voters trust their local paper, as opposed to 27% for national papers. There seems to be a head start for local papers for loyalty and and trust; now creating unique and valuable stories worth paying for is how to increase profits.

Fake News has been described as a disease of modern communication; manipulative individuals trying to achieve their own selfish goals by prying on the gullibility of the masses through social media. When it doesn’t take much to sway one’s opinion in a presidential election or a referendum, the public deserves to get facts and truths from their news outlets. The majority of Americans now believe that articles should only present the facts and not include interpretation or opinion, according to Pew Research. Newspapers can take advantage of this new wave of thought and create a resurgence that provides the North American public with the consistently genuine journalism that they desire. After a difficult decade for the newspaper industry, this looks like an opening into renewed profits and attention. Using a unique approach to reporting, reasonable pricing models and exquisite investigation of the facts, digital newspaper stories could be the cure to a disease of modern communication.

AdPerfect Adds The Seattle Times to Its Growing Customer List

The Power of Social Media